And we’re back! A year ago, I agreed to a bit of larky college basketball gambling prognostication against the spread. Despite spending the entire season caveating my way out of readers taking my picks seriously, and ending up with a predictably meh showing — I was good at guessing my own mediocrity, if nothing else — I’m back for another go. Are we having fun yet?

Real talk: Other than placing a brilliant bet on Italy ahead of Euro 2020, I am not an accomplished gambler. It’s just not my thing at all. This column is mostly just my excuse to talk about the coming night’s best basketball games. In the immortal words of Richard Keys: Please. This is just. Banter. For heaven’s sake, do not use these picks to wager real money, unless you’re using them to decide on doing the opposite of what I just said I was going to do. (There is a succinct term of jargon for this, I’m sure. Ah, well, I’ll learn it in Year 3.)

As always, I have 100 tokens to spread around various games as I see fit, with a 10-token minimum allocation.

Let’s see how hot Ol’ Gil can get this year!

Baylor (-5.5) vs. Virginia in Las Vegas, 7 p.m., ESPN2: So: Just how good is Virginia, anyway? We feel pretty confident suggesting Scott Drew’s latest Baylor blend, comprising the usual balance of developed veterans (Adam Flagler, LJ Cryer, Flo Thamba, Dale Bonner) and incredible freshman talent (Keyonte George, who might be the best freshman guard in the country) is among the best three or four teams in college hoops. As far as we can tell from three early-season blowouts, anyway, Baylor has the look. Virginia is a much bigger question. The Cavaliers — who were atypically just OK on both sides of the ball last season — returned almost everyone, including a breakout-ready Reece Beekman, and have added quality pieces both in recruiting (wing Isaac McKneely) and the transfer portal (well-fitting former Ohio big Ben Vander Plas) such that top-ranked incoming freshman Isaac Traudt decided to take a redshirt before playing in Virginia’s first game. One assumes this means Tony Bennett likes his team as currently constructed and isn’t scratching around, as he did last year, for personnel answers. Maybe the outlying, lofty preseason esteem in which Ken Pomeroy’s algorithm held this team (fifth in the preseason rankings; now sixth after wins over NC Central and Monmouth, the latter of which was an 89-42 demolition) is real. Maybe the cohesion, after several years of shifting rosters, is just what Bennett needed. Maybe — but we still think Baylor is the safer bet. The pick: 20 on Baylor.

Indiana (-1.5) at Xavier, 6 p.m., FS1: On paper, Indiana should be happy with the matchups on the Xavier scouting report. This is not to say that Xavier isn’t good — the Musketeers have, to no one’s surprise, hit the ground running under new (old) head coach Sean Miller. Zach Freemantle has dominated early-season opponents on the low block, while Jack Nunge has started the season ablaze. Nunge makes a lot of sense as a Miller player; he has been a rangy, more-skilled-than-you-think big since his Iowa days, and he is going to have a bright green light in his senior season in Cincinnati. UTEP transfer Souley Boom is off to a hot start, and Adam Kunkel and KyKy Tandy are experienced. This is a good core. It’s just a core that Indiana, with Trayce Jackson-Davis, Race Thompson, and a coterie of talented wings (Miller Kopp, Tamar Bates, Trey Galloway and freshman Jalen Hood-Schifino have all played very well to start the year) should be able to neutralize with some regularity on the defensive end. The Hoosiers match up well. They are more talented. The big concern — and one Mike Woodson hinted at in his pregame press conference Thursday — has nothing to do with the physical, but rather the emotional side of the game. “I’m kind of anxious to see where we are going into tomorrow night’s game because we are going to have to be a good road team in order get where we need to go,” Woodson said, of a returning group that had its share of troubles winning away from Bloomington last season, that always seemed to make some crucial late mistake. “It can be kind of nerve-racking for some of these young guys. I’m interested in seeing who steps up and who is ready to play and see where we are.” Can Indiana overcome the noise and the nerves? The guess here is yes—but only barely. The pick: 20 on Indiana.

UCLA (-3.5) vs. Illinois in Las Vegas, 9:30 p.m., ESPNU: The Illini are totally brand new. Save Coleman Hawkins, who has gone from stretch-forward glue guy to focal point when he’s on the floor, there are very few vestiges of Brad Underwood’s Kofi Cockburn-era teams left. What remains, though, certainly looks interesting — more positionally flexible and fungible than the collectively conventional roles any team with a classic center like Cockburn has to occupy. Meanwhile, Underwood has totally turned the ball over to form Texas Tech transfer Terrence Shannon Jr. He was frustrated by his touch numbers at Tech, and he must be loving life now; he is using nearly a third of Illinois’s possessions when he’s on the floor and taking 28.2 percent of his shots. Illinois is highly intriguing and a potential force in the Big Ten; there’s a lot to like. Still, the Bruins are the pick here. You know what you’re going to get from Tyger Campbell and Jaime Jaquez Jr., not to mention the rest of a talented and flexible-in-its-own right team that looks capable of matching up to whatever spaced-out looks Illinois wants to throw at it. Campbell should control the pace of the game, and the country should get a good look at how well Jaylen Clark has been playing. The pick: 30 on UCLA.

Villanova at Michigan State (-5.5), 8 p.m., FS1: Chris Arcidiacono can’t possibly be this bad, right? The sheer notion flies in the face of everything we know about Villanova basketball, about the long proud line of House Arcidiacono ballers, about why I can spell this kid’s last name correctly without looking it up. Has 65.8 offensive rating? A 26.7 percent turnover rate? A 4.1 percent assist rate? Two-of-eight from the field in his first three games? Despite the surprise loss to Temple and two dicey performances against La Salle and Delaware, the bones of a good Villanova team are still here: Eric Dixon, Caleb Daniels, Brandon Slater and Jordan Longino are four dudes you can imagine Jay Wright running out every night with no hesitation. They make sense. But if Arcidiacono doesn’t play better, more commanding basketball with the ball in his hand, Villanova doesn’t have too many other places to turn, and their rocky start to post-Wright life will continue apace. Here’s guessing they summon enough to rise to the East Lansing occasion — enough to turn it into a scrap, anyway, if not a road win. The pick: 10 on Villanova.

Florida (-6.5) at Florida State, 8 p.m., ACC Network: Don’t look now, but Colin Castleton is playing like the player of the year. The annually overlooked Florida center is currently averaging 25.3 points, 8.7 rebounds and four blocks per game. After a 33-point night against Kennesaw State last week, Castleton had 30 points, 12 rebounds and five blocks against Florida Atlantic at home Monday … in a losing effort. FAU made 13 3s, and appear to be pretty darn good, but it’s not the most confidence-inspiring effort in advance of a road trip to rival Florida State. The good news? Florida State appears to be just plain bad. The Seminoles are 0-3 with losses to Stetson, UCF and Troy. Stetson scored 83 points in 65 possessions! It’s not looking good, brev, especially now with an All-American coming to town. The pick: 20 on Florida. 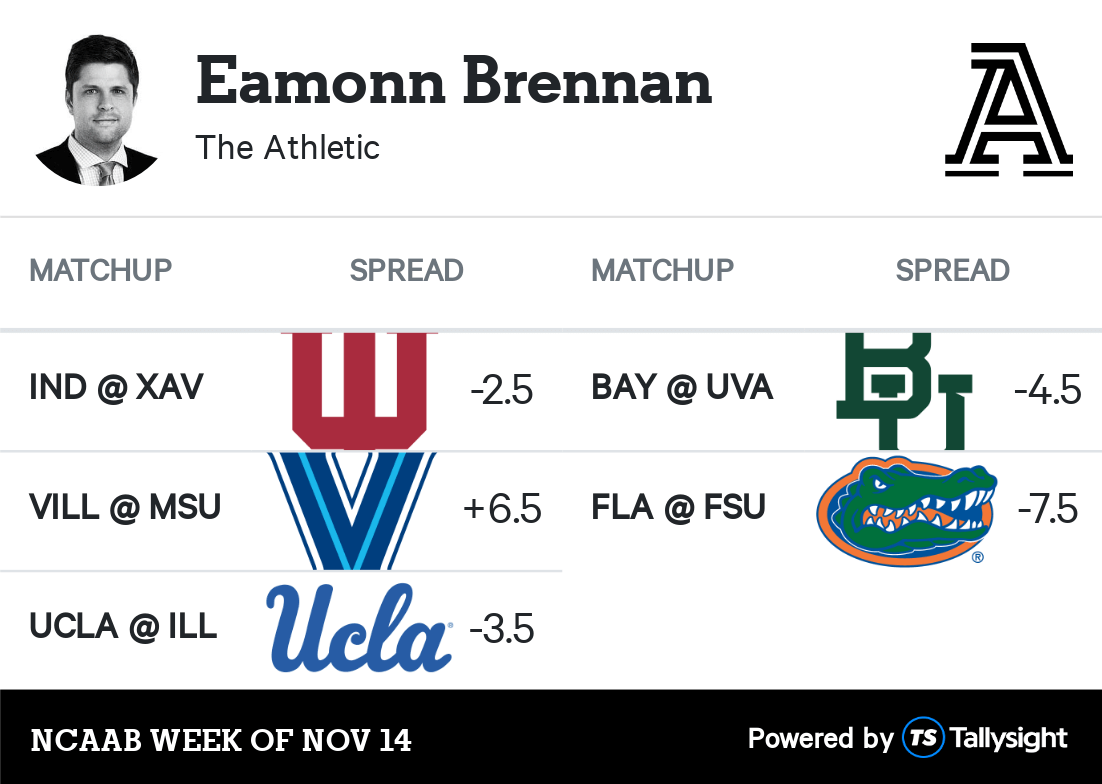