Signing a deal with a major sports company and starting your shoe line are things young athletes dream of. Tennis star Coco Gauff secured this dream at the age of 14. She signed a contract with New Balance in 2018. In 2022 she launched her silhouette. But then, when a two-time NBA champion flaunted her shoes on the court things got better.

Following her contract extension with New Balance, Coco Gauff’s CG1 silhouette entered the market. The shoe paid a tribute to her family with words and names written all over in fine print. The back tongue of the shoe has an inspiring quote on it. It says, “You can change the world with your racquet”. It is important to note that New Balance has also launched silhouettes with NBA stars like Zach LaVine and Kawhi Leonard.

Fans were excited about the launch of the CG1s. Positive comments rushed Gauff’s way leaving her exhilarated by the response the shoe received. However, her emotions reached their peak when Kawhi Leonard was seen wearing her shoes.

Due to a knee injury, Kawhi Leonard sat on the sidelines during the game between LA Clippers and LA Lakers. While the news of the Clippers beating the Lakers made headlines, Kawhi Leonard’s sweet gesture found its way into the post-game discussion. Leonard flaunted the CG1s while he supported his team from the bench. The world took notice of this, and so did Coco Gauff.

Gauff expressed her excitement in an Instagram story. Having shared a post with a picture of Leonard and the CG1s, Gauff captioned the story, “Kawhi spotted in CG1s”. This was clearly a big deal for 18-year-old Gauff. 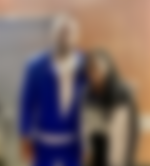 Gauff and Leonard have met previously in 2019. They met during an NBA game between the Clippers and Toronto Raptors. Again, she used Instagram as a medium to share her relationship. She captioned her post, “I put a pretty fun guy tonight.”

Earlier this year, Leonard launched his second shoe in collaboration with New Balance. Dedicated to the spirit of Halloween, the shoe line was called ‘New Balance Kawhi II Goosebumps.’ The shoe paid tribute to the series of Goosebumps books and had a spooky effect on it.

What’s your take on the CG1s and Kawhi II Goosebumps? Let us know in the comments below.