The first edition of The Athletic‘s 2023 Consensus Big Board is now available, and it makes for an interesting discussion. This board combines rankings from a wide range of draft experts to identify how the top prospects are viewed against the rest of the 2023 draft class. It’s meant to give you a broader scope of opinions, rather than just one expert’s, and highlights the top 50 prospects as things currently stand.

The Lions are slated to have three selections among the top 50. One of those picks used to belong to the Los Angeles Rams, before it was shipped off to Detroit in exchange for Matthew Stafford. It worked out pretty well for LA, but the reigning Super Bowl champs are now in a free fall. They’re 3-6, and they’ve lost five of their last six contests. They can’t run the ball or protect Stafford, who’s in concussion protocol. Star wide receiver Cooper Kupp suffered a high-ankle sprain and is set to have surgery that will sideline him for at least four games. Not to mention, the Lions are higher in the standings than the Rams. Just as we all predicted.

It’s hard to imagine this one working out much better than it already has. A top-20 pick likely would’ve been considered a win before the season. But the LA pick is currently eighth and could continue to inch closer to the top, should the Rams continue to struggle. Pair that with the Lions’ own pick (No. 11 at the moment), and Detroit could potentially add two of the top-10 prospects in this class, along with another top-50 talent in the second round.

So, which players could potentially be available at those spots? Let’s turn to the big board consensus.

The good thing about having five picks among the top 75? The Lions have some ammunition to execute a trade up, should a player catch the attention of GM Brad Holmes. That means consensus top prospects like Will Anderson Jr., Jalen Carter, Bryce Young or CJ Stroud could be in play if the Lions find a willing trade partner and package some assets to make a move. However, for the sake of this article, we’ll try to stick with players who have a better chance of being there when the Lions are slated to pick.

Georgia BC Kelee Ringo: Cornerback feels like one of — if not, the biggest — needs for the Lions. Outside of Jeff Okudah, Detroit has not gotten much from its corners. Ringo is the consensus top cornerback in this year’s class, ranking 10th overall on the big board. He was the No. 4 overall prospect in his recruiting class and has looked every bit the part of a first-rounder since earning a starting job at Georgia. He’s an excellent athlete with great length at 6-feet-2. A few weeks ago, Georgia coach Kirby Smart revealed that Ringo called him and told him he wanted to shadow Tennessee wide receiver Jalin Hyatt ahead of the biggest game of the season. That should tell you what kind of mentality and confidence he possesses. He’d be an excellent addition at either No. 8 or No. 11. South Carolina’s Cam Smith (No. 13 on the consensus big board) and Penn State cornerback Joey Porter Jr. (No. 17) could be options as well.

Clemson edge Myles Murphy: This is an interesting position for the Lions. Holmes drafted Aidan Hutchinson and Josh Paschal in the first two rounds a year ago. Hutchinson is an all-around talent and a smart player who’s proven his value as a rookie and should only improve over time. Paschal only has a few games under his belt, but he has the look of an edge-setting defender who’s better against the run and could potentially even kick inside thanks to his versatility. Charles Harris signed a two-year contract in the offseason and Romeo Okwara is working his way back from a torn Achilles. Is that enough? Should the Lions give this group a chance? Or should they look to further improve a pass rush that ranks 25th overall in pressure percentage?

Murphy is a fascinating talent. He has recorded 10 tackles for loss and 6 1/2 sacks this season. He’s got size and burst, which is why he checks in at No. 5 on the consensus big board, with an average ranking of 6.7. Here’s what The Athletic’s Diante Lee had to say about him in the story:

“As with any draft, I’m fascinated by the ‘traits’ guys on the defensive side of the ball, particularly up front. Myles Murphy has the size of edge rushers from a past generation (6-foot-5, 275 pounds) and the best get-off in this class, without question. Expect him to put up similar combine numbers to last year’s first overall pick, Travon Walker, but I’d argue that Murphy is much further along as a pass rusher than Walker was at this point in his college career.”

That’s a compelling argument, particularly if a guy like Anderson is off the board already. The thought of Hutchinson and Murphy coming after quarterbacks, with Paschal having the versatility to play anywhere, is intriguing.

Clemson DT Bryan Bresee: The No. 1 overall prospect in a 2020 recruiting class that featured Young and Ringo, Bresee chose Clemson and immediately produced. He was a Freshman All-American in his first season, but a torn ACL limited him a year ago. He has since returned to action, and when healthy, he’s a disruptive presence in the interior. With Levi Onwuzurike out for the season with a back injury, the Lions might need to address the defensive tackle position. Bresee is one of the high-end options in this draft.

Kentucky QB Will Levis: You knew a quarterback was coming sooner rather than later. With Young and Stroud likely gone by No. 8, Levis is the only other quarterback being discussed in this range. He’s going to be selected in the first round, perhaps as high as the top 10, simply because of his traits alone. He has a live arm and a laser-quick release. He’s tough, has a durable frame at 6-foot-3, 230 pounds, above-average athleticism and his two offensive coordinators at Kentucky come from NFL backgrounds. But his college production leaves a lot to be desired, as does his decision-making. Josh Allen comparisons have been floated when discussing Levis, but that feels like wishful thinking at this point. Levis has a lot of work to do.

Still, all the tools are there, and those tools will have him in consideration. He lands at No. 14 on the consensus big board, which puts him firmly in Lions territory.

Clemson LB Trenton Simpson: A third Clemson defender? Sure, why not. Just like cornerback, the Lions could use another linebacker. Malcolm Rodriguez looks like a steal for a sixth-rounder, but the other options on the roster lack consistency. Simpson is the best of the bunch in this year’s class, and it’s not hard to envision him in this defense. He has the athleticism to be a plus in coverage and as a pass rusher, while playing as a stack linebacker. He could be a perfect fit next to Rodriguez, giving Detroit a pair of young linebackers to build around. This could be a position the Lions look to fill in free agency instead, but there’s so much to like about Simpson’s game. Though he ranks 21st on the consensus big board, The Athletic’s Dane Brugler has him at No. 14 on his own top-50 list.

Notre Dame TE Michael Mayer: It feels highly unlikely for the Lions to draft a tight end in the first round, considering they have far more pressing needs and just traded a 2019 first-rounder (TJ Hockenson) last month. James Mitchell will get a chance to prove he can be the tight end of the future, and if not, the Lions could certainly target another prospect later in the draft or circle back next year. Still, we’ll include Mayer in this discussion, who earns the eighth-highest position on the big board.

Texas RB Bijan Robinson: Robinson is No. 6 on the consensus big board. Like Mayer, it’s hard to envision the Lions taking a running back this high. Jamaal Williams is playing well and D’Andre Swift, though limited and often injured, is still under contract through the 2023 season. It might make sense to target a mid-round running back, though. The two RBs on this list—Robinson and Alabama’s Jahmyr Gibbs—might be too rich.

Florida G O’Cyrus Torrence: The Lions should start thinking about their future at guard. Halapoulivaati Vaitai was in the midst of a great training camp and preseason, but a back injury and subsequent surgery has made for a lost season. Campbell did not seem optimistic about Vaitai’s chances of playing this season, and in his absence, right guard has been a bit of an adventure. Logan Stenberg got a shot there early but played poorly and was benched. Evan Brown, a backup center, has stepped in and held his own there, but it’s clear that’s not his natural position. The Lions would be wise to invest in a guard, and Torrence, No. 35 overall, is viewed as the best in this year’s class. There’s a chance he slips into the back end of the first round, but it’s worth mentioning a guard, and Torrence is the only one in the consensus top 50.

Oregon BC Christian Gonzalez: As one would imagine, there’s a bit of a discrepancy between some prospects. Gonzalez ranks No. 13 on Brugler’s top-50 list but No. 40 on the consensus big board. I have a feeling he’ll go much higher than this, but if he’s there and the Lions haven’t already drafted a corner, it’d be a great value pick. 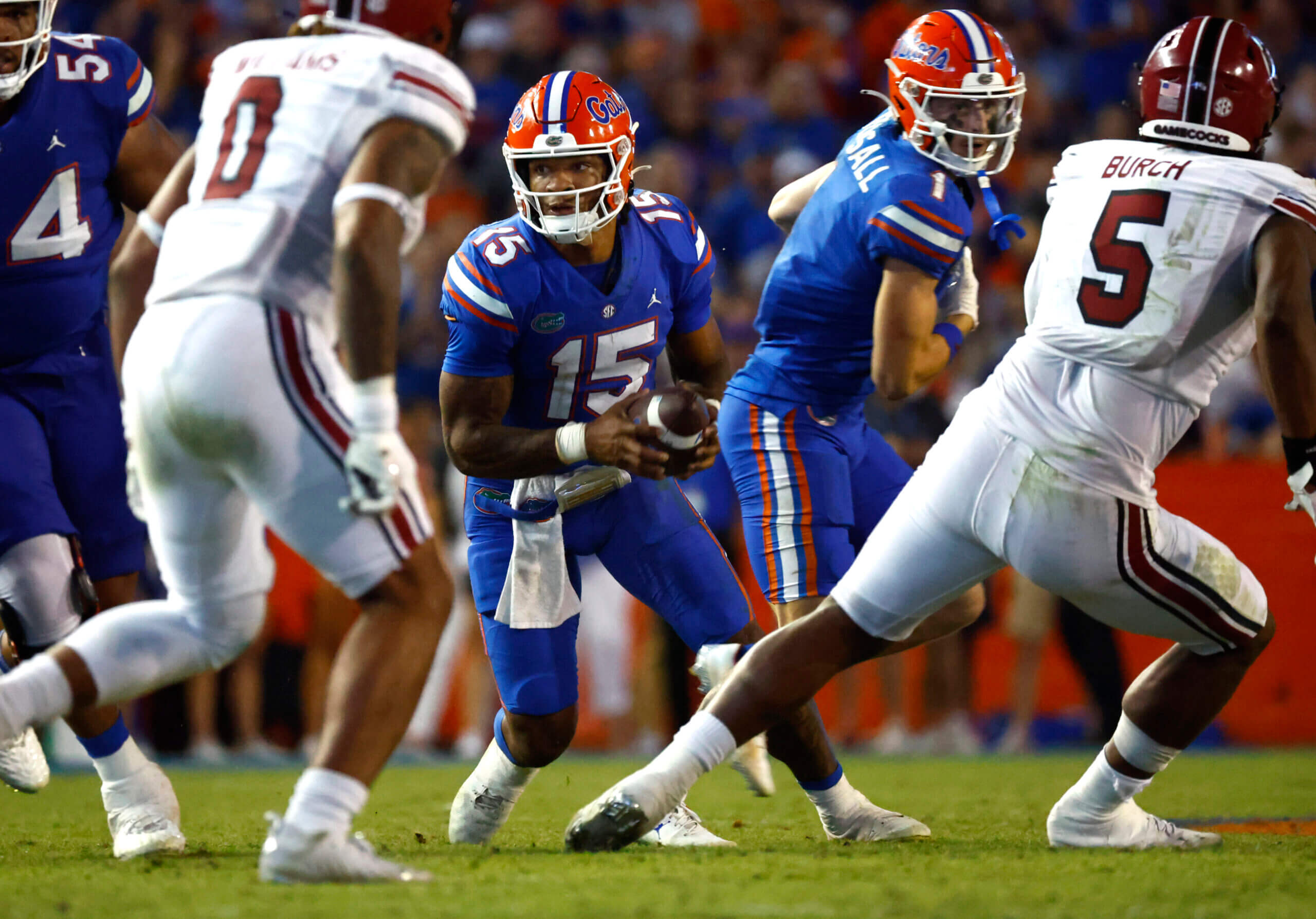 Florida QB Anthony Richardson: One name at quarterback, at least according to the big board, could be Richardson. He’s one of the most intriguing prospects in the draft — a player oozing potential, but also one who’s far from NFL-ready. This is Richardson’s first full season as a starting quarterback and it’s shown. Errant throws, poor footwork and decision-making have plagued him at times. But he’s also flashed a rocket arm, elite athleticism and a special ability to create when things break down around him. The consensus big board has him at No. 45 and the Lions pick at No. 42. With that being said, quarterbacks tend to go higher than their rankings considering the value of the position. Especially a quarterback with all the tools in the world like Richardson. Should he declare and impress during the draft process, it’s not hard to see him going higher than this.

Tennessee QB Hendon Hooker and Stanford QB Tanner McKee: McKee plays on a Stanford team that lacks talent, but he remains in the early Day 2 discussion because of his vision and accuracy, per Brugler. At No. 44 on the consensus big board, he could be there for the Lions. As could Hooker, ranked No. 42. Hooker is about as steady as it gets, blossoming into one of the best quarterbacks in college football this season. He rarely makes mistakes and plays to his strengths. However, he’ll be 25 at the start of his rookie year and will turn 26 by the end of it. It’s certainly fair to wonder how much upside remains and how much of his game is already tapped out.