NOGALES, Ariz. — Benjamin Ley-Shipley is like thousands of other teenagers across the United States. He’s a high school football player who loves the game and has hopes of playing at the small college level over the next few years.

He’s a running back, defensive back and a standout on special teams. He’s also a long-suffering Chicago Bears fan.

“I tried football out in eighth grade and just fell in love with it,” Ley-Shipley said. “The teamwork involved, it really fit. There’s nothing quite like it. If you’re weak in one area, it can affect everything.”

The popularity of football in this town of about 20,000 on the border between Arizona and Mexico sometimes takes a backseat to that of soccer, baseball or basketball, but there’s little doubt football has gained a substantial foothold over the past few decades. Ley-Shipley — whose father is from Mexico — just wrapped up his senior season and has received some interest from a few NCAA Division III college programs.

“I just hope they know there’s some good players down here,” the 18-year-old said.

It’s a curious phenomenon for football: While the game continues to build its already substantial Latino fan base, particularly among Mexican-Americans as well as in Mexico itself, it hasn’t really translated to more Latino players in the NFL or at the college level .

Latinos’ love of football — particularly in Mexico — is clear. That passion will be on display Monday night when the Arizona Cardinals face the San Francisco 49ers at Estadio Azteca in Mexico City. A sellout crowd is expected.

It’s one of five international games for the NFL this season, though it’s the only one not in Europe.

According to a report by the Institute of Diversity and Ethics in Sport, there were just 12 players in the NFL who identified as Latino in 2021 — less than 1% of the league. That number has remained fairly steady over the past 20 years, though categories have changed and been added, with nearly 10% of the league identifying as ‘two or more races’ in 2021.

The numbers for NCAA Division I college football players are slightly better, with 3.4% identifying as Latino.

But those figures are still way below the 18.7% of the US population that identified as Latino, according to the 2020 Census.

Nogales Coach Jake Teyechea said he’s worked hard to get some of his players more looks from college coaches. Ley-Shipley and Esteban Acevedo — a 6-4 offensive linemen — are two players he believes could help a college team.

“It just comes down to getting those coaches down here,” Teyechea said. “We all want the same thing for them. We want them to grow up, be better men and help wherever they can. I wish these schools would come out and give it a chance. I think they’d be surprised at what they find .”

The 49ers-Cardinals matchup Monday comes about 17 years after the two teams were part of the first regular-season NFL game played outside of the US, which was also at Estadio Azteca. Arizona beat San Francisco 31-14 in 2005 in front of more than 100,000 fans.

This will be the fifth regular season game played at Estadio Azteca and the first since 2019.

Rolando Cantu was part of that 2005 Cardinals team as an offensive lineman and is now a broadcast analyst for Telemundo. He’ll be working the game Monday night and said he can’t wait for Mexico City to get another moment in the spotlight.

“It instantly becomes a playoff or Super Bowl-type environment for whatever teams are involved,” Cantu said. “A lot has changed, the fan base has a lot of youth. The NFL has done a great job at the grass roots levels with kids camps.

“Every year, the fan engagement is better.”

Cantu also credited the NFL for expanding its flag football reach in Mexico, which is more accessible for some kids because it doesn’t involve buying helmets and pads that can be prohibitively expensive.

As the NFL eyes expansion opportunities outside of the US, Mexico City would make sense. One advantage is that time zone considerations wouldn’t be an issue (like it would be for a European-based team). It would also be a normal flight for most teams, particularly those based in Los Angeles, Las Vegas, Phoenix or Houston.

“It’s a regular business trip,” Cantu said. “When you go to London or Germany, you really have to plan for the logistics.”

The Cardinals have two Latino players on the roster — Max Garcia and Will Hernandez. Both are offensive linemen. Garcia’s dad is Mexican and the 31-year-old is proud of his heritage. In the Cardinals’ locker room last week, he wore a hooded sweatshirt that said “yea…soy Latino” across the forehead.

He said he’s confident the numbers of Latinos in the league will grow.

“As the game progresses, we reach more countries, the game will evolve,” Garcia said.

Cantu agreed. Back when he was playing in the mid-2000s, it was fairly rare to see a Latino last name on the back of an NFL jersey. That’s beginning to change, even if progress is slow.

“It’s a process,” Cantu said. “Will [Hernandez] is a perfect example. Parents from Mexico City, grew up in Vegas and just pushed his way up through the ladder thanks to football. Football opened the doors for him. Most Latino communities have student-athletes who can do it, and I think we’ll see more in the league.

FILE – Arizona Cardinals guard Max Garcia (75) drops back to block against the New Orleans Saints during the second half of an NFL football game, Thursday, Oct. 20, 2022, in Glendale, Ariz. The NFL returns to Mexico City on Monday, Nov. 21, 2022, when Arizona Cardinals play the San Francisco 49ers. The Cardinals have two Latino players on the roster—Max Garcia and Will Hernandez. (AP Photo/Rick Scuteri, File) 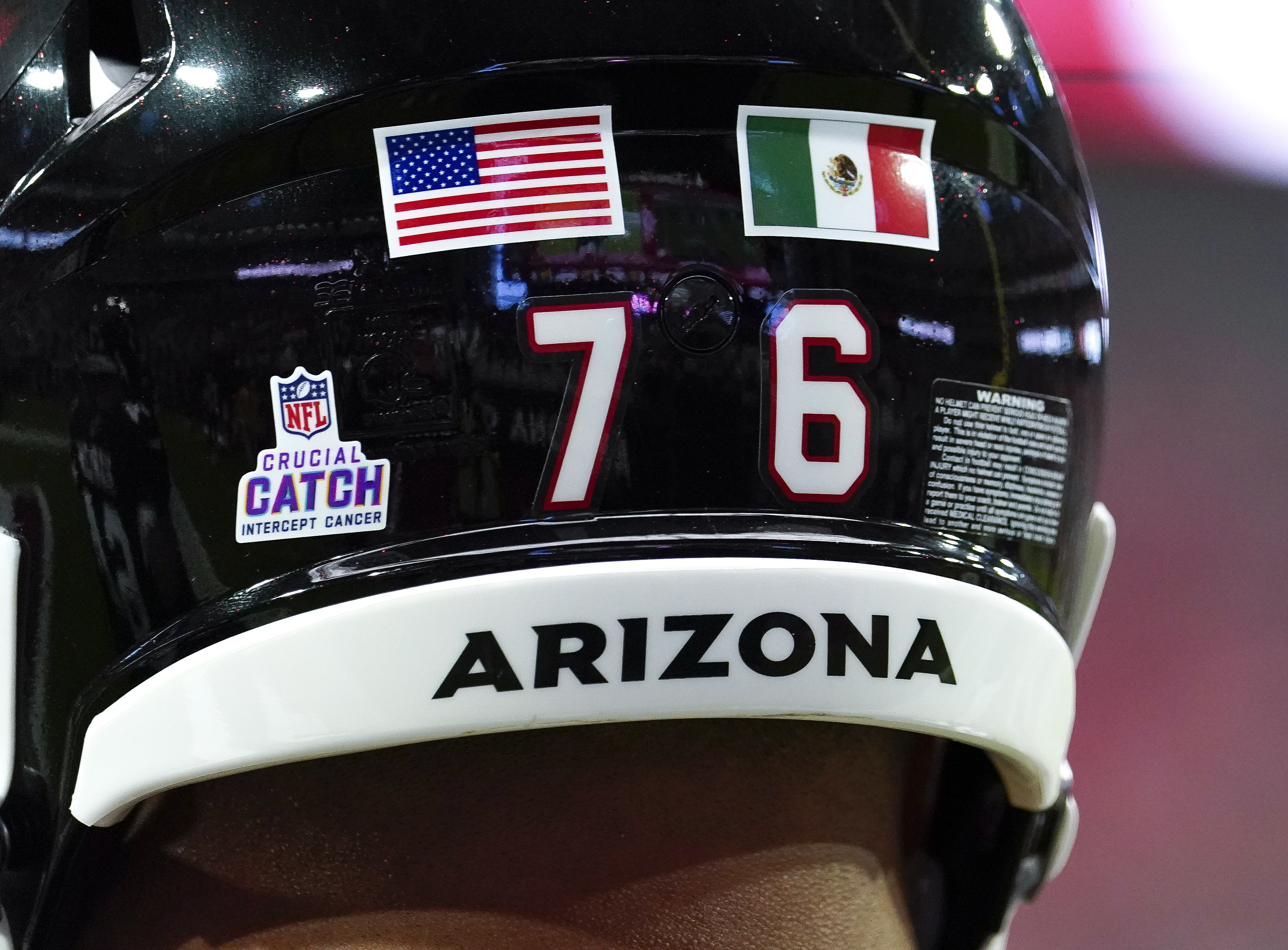 FILE – Arizona Cardinals’ Will Hernandez wears a United States flag and a Mexican flag on his helmet before the first half of an NFL football game against the Philadelphia Eagles, Sunday, Oct. 9, 2022, in Glendale, Ariz. The NFL returns to Mexico City on Monday, Nov. 21, 2022, when Arizona Cardinals play the San Francisco 49ers. The Cardinals have two Latino players on the roster—Max Garcia and Will Hernandez. (AP Photo/Darryl Webb, File) 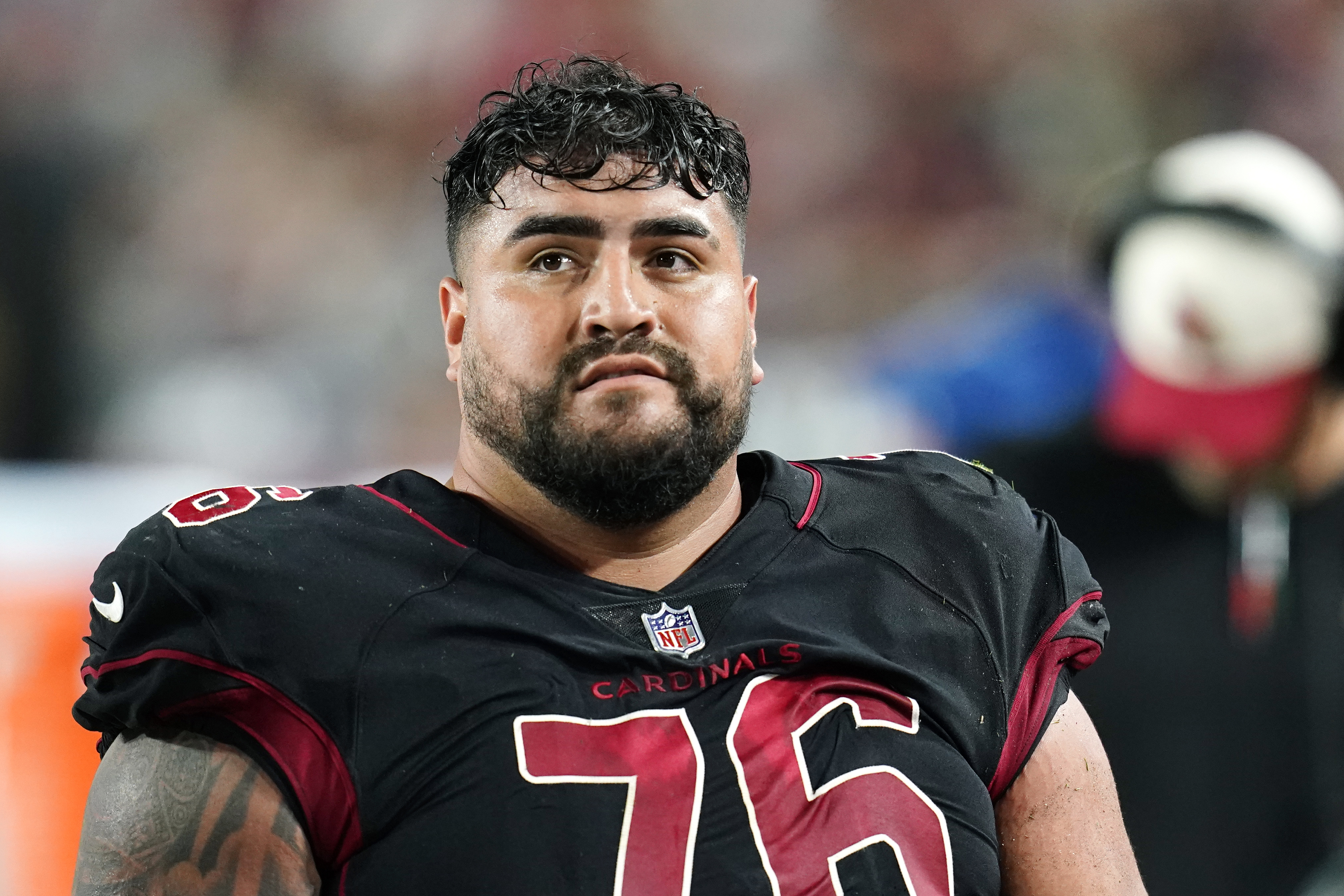 FILE – Arizona Cardinals guard Will Hernandez pauses on the sideline during the second half of an NFL football game against the New Orleans Saints, Thursday, Oct. 20, 2022, in Glendale, Ariz. The NFL returns to Mexico City on Monday, Nov. 21, 2022, when Arizona Cardinals play the San Francisco 49ers. The Cardinals have two Latino players on the roster—Max Garcia and Will Hernandez. (AP Photo/Ross D. Franklin, File) 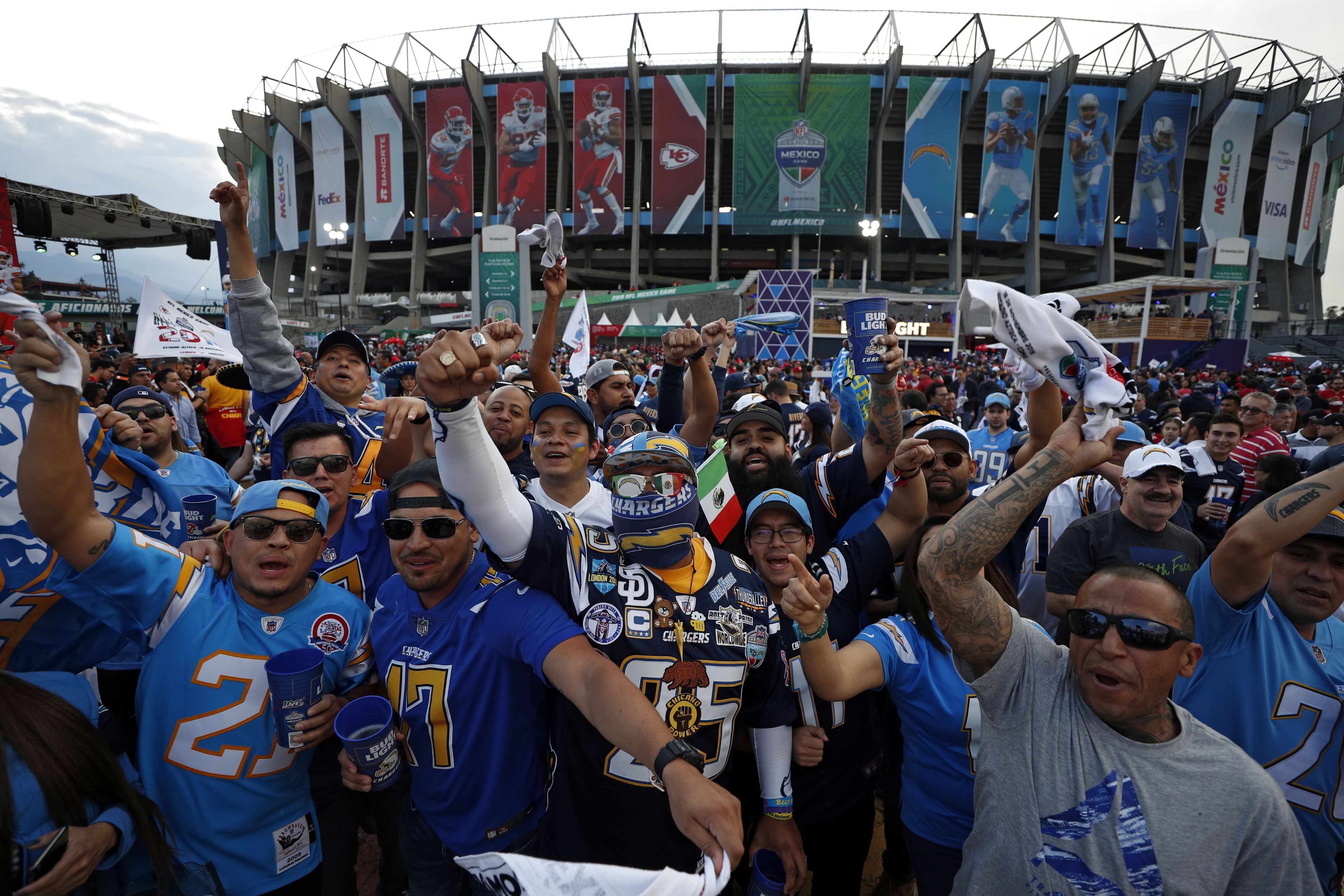