When Kyle Pugh began his undergraduate career at Northern Illinois in 2015, Kobe Bryant was beginning his final season as a Los Angeles Laker, Joe Biden was the vice president of the United States and Tik Tok was just a cringey lip-syncing app called Musical. ly.

Yes, things have changed a lot since. But not quite as much for Pugh, who remains a Huskie and is right now wrapping up his eighth year on NIU’s roster. That’s thought to be the longest tenure ever for an FBS player and hints at the resilience the 25-year-old has shown through multiple setbacks — and a pandemic. Pugh will take his final football bow Nov. 26 on Senior Day when NIU hosts Akron in DeKalb. That will put a bow on one of college football’s most unusual careers that will end with at least 236 tackles, 1 interception, eight team photos and two master’s degrees.

But how did he get here? Or better yet, how is he still here? I got in touch with Pugh because I wanted to hear more of his story.

At Bloom Township High School outside Chicago, Pugh put up impressive numbers as a linebacker. During his senior year, he chartered 112 tackles, recovered four fumbles and led his team to the playoffs. And though he drew attention from several DI programs, the choice for where he wanted to play college ball was clear.

“The best decision for me was to go to Northern Illinois,” he said. “It was really close to home. I come from a big family so it was important that my folks could at least come to the home games. And at that time NIU was on a crazy run; the team had just gone to the Orange Bowl …so it was a great fit for me.”

Like any other high school standout with major talent, Pugh imagined what the next four years of his life would look like: playing time, clean bills of health, and a conventional college career. That was far from what happened.

He redshirted his freshman year, placing an emphasis on his studies while being sidelined. And in a case of foreshadowing, Pugh decided to major in kinesiology, finding an interest in functional anatomy and the mechanics of body movement.

Pugh saw his first collegiate action the following year, playing in 10 games as a back-up linebacker and on special teams. He made his first start in 2017. He flourished in the first unit with 17 tackles in the season-opener and 35 tackles through his first four games as a starter. But in the final minutes of the fourth game that year, Pugh suffered a bicep injury that ended his season.

In 2018, the middle linebacker played in almost every game despite suffering a shoulder injury early in the year. After NIU won the MAC championship, Pugh had surgery. “I played through a shoulder problem but I got it fixed after the season,” he said. “Then two games into the 2019 season, I re-injured that same shoulder and lost that full season.”

And the hits, no pun intended, just kept on coming.

The COVID-19 pandemic cut the 2020 season down to six games, of which Pugh appeared in five. An ACL tear on a non-contact play in spring practice the following year canceled his 2021 season altogether.

But perhaps even more unheard of than this seemingly never-ending string of unfortunate events, was Kyle Pugh’s perseverance and motivation to return to the field.

The timing of his injuries also played a pivotal role in his desire to return. “If I would’ve gotten hurt before having any success on the field, it would’ve been a different story for me. But I was able to play enough football to prove that I could play at a high level before it was taken away from me. So each time I got hurt I just had the mindset that if I could get through the injury, I could get back to playing at that high level.”

He credits his family and NIU’s coaching staff with being his support system. “My mom is a spiritual warrior and always tells me to keep believing things will get better. And my dad sets the tone for my work ethic,” Pugh said. “This current coaching staff made it a point to speak life into my current situation, and inspired me to keep going and pursue my dreams.” 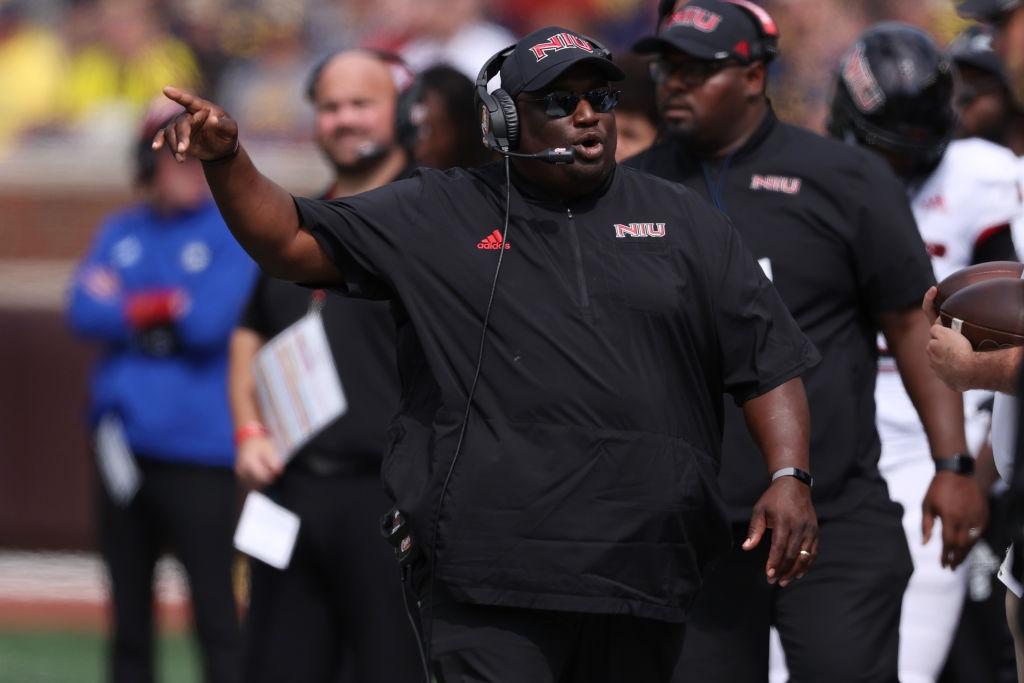 Here’s a breakdown of how each of Pugh’s seasons played out:

Now, as an elder statesman on the roster, Pugh takes on the role of a de facto mentor for a team full of young men several years his junior. “I’ve seen a lot of football and a lot of life and [my teammates] come to me with problems that they have. It’s all about sharing knowledge and being open to talk to them.” Pugh chuckled as he mentioned setting his younger teammates straight on a debate that questioned whether Rihanna has a better discography than Beyoncé.

His answer: she doesn’t.

And luckily, imparting words of wisdom isn’t his only area of ​​success this season; a clean bill of health has allowed him to remain active this year. 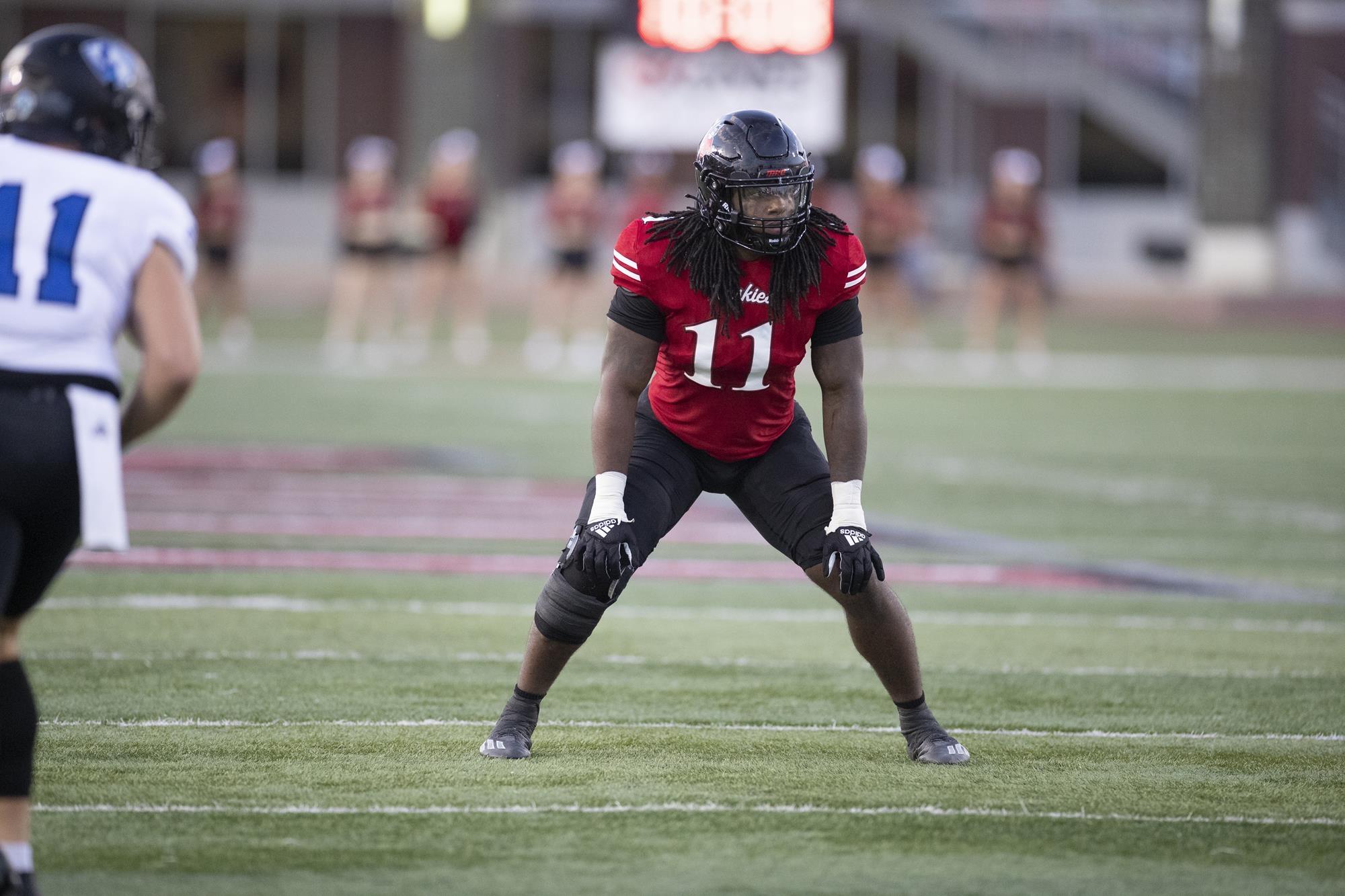 So what’s next for Kyle Pugh?

That long awaited senior day is Saturday, Nov. 26 as he celebrates the end of an unprecedented career eight years in the making.

He wants to use what he’s learned through the ups and downs of his career to impact others who find themselves in tumultuous circumstances. “My story is a tough one, but it equips me to share my knowledge with people who are going through similar situations,” he said.

His second master’s program also drove home the importance of rehabbing one’s mental health when recovering from injuries. “You’re at a high risk of re-injury if you’re stressed or scared, so that clicked with me right away that it’s important to work on the mental aspect first … I’ve become passionate about the psychological part of sports rehabilitation, so working with athletes on not just the physical part of returning to sports but getting the mental part strong again is something I want to do.”

That, and making sure the kids know Beyoncé trumps Rihanna.