And now, 20 Final Thoughts from a Saturday in which I sliced ​​my finger open cutting a bagel and spent two hours at urgent care watching games on my phone. (I still had a better Saturday than Kentucky.)

1. For Pac-12 fans who’ve suffered through six years of increasing irrelevance, first by annually missing the College Football Playoff, then due to recent looting from the Big Ten, next Saturday looked to be a rare moment in the spotlight. Four teams ranked in the committee’s top 13 would stage a doubleheader of CFP-impacting games, first No. 8 USC at No. 12 UCLA, then No. 13 Utah at No. 6 Oregon.

Yet again, the conference can’t have nice things.

2. No. 25 Washington dashed sixth-ranked Oregon’s hopes Saturday night in a wild 37-34 upset. The highlight of the night was Michael Penix Jr.’s breathtaking 62-yard touchdown throw to tie the game, and Peyton Henry’s 43-yard field goal with 51 seconds left ultimately made the difference. But the “play” of the game was Ducks coach Dan Lanning’s inexplicable decision to go for it on fourth-and-1 from his own 34, in a tie game with around 1:40 left, as banged-up star QB Bo Nix stood next to him signaling he was ready to go back in. Backup QB Ty Thompson handed off to Noah Whittington, who slipped and fell behind the line. The door magically opened for the Huskies, and they took it.

3. Washington’s Kalen DeBoer has flown under the radar nationally, but Saturday’s upset of the Huskies’ (8-2, 5-2 Pac-12) hated rival lifted his first season to a new level. Washington finished last season 4-8 and No. 113 in offense, and it felt like Jimmy Lake sapped all the energy out of that program. DeBoer, with the help of Indiana transfer Penix, has restored both hope and fun virtually overnight. The Huskies have a Top 25 offense, just beat Oregon for the first time in five years and still have a shot at reaching the league title game.

It’s going to feel like a wasted opportunity by Chip Kelly in his last season with QB Dorian Thompson Robinson and RB Zach Charbonnet (24 carries for 181 yards and three TDs) if this team finishes 9-3 and goes back to the Holiday Bowl. The Bruins still have a chance to save their season…but it would put an end entirely to the Pac-12’s CFP hopes.

5. That’s because the last remaining contender is No. 8 USC (9-1, 7-1). For all the offseason bluster, Lincoln Riley has the Trojans in exactly the same place he usually had Oklahoma this time of year. USC, which routed Colorado 55-14 on Friday, has not started a season 9-1 since Pete Carroll’s Rose Bowl team in 2008. Next week’s crosstown showdown in Pasadena will still be the school’s biggest in many years, given the stakes.

On a down note, USC RB Travis Dye suffered a season-ending knee injury Friday night. It’s a huge loss for the Trojans. Assuming Dye enters the NFL Draft, the Oregon transfer will finish his career 10th on the Pac-12’s all-time yards from scrimmage list (5,066).

6. While the Pac-12 cannibalizes itself, No. 4 TCU keeps laughing at the notion of Big 12 parity. The Horned Frogs, now 10-0, further asserted themselves as a potential Playoff team with Saturday night’s 17-10 win at No. 18 Texas.

TCU won this one with defense. The Horns couldn’t run the ball, and QB Quinn Ewers completed less than 50 percent of his passes. Texas’ (6-4, 4-3 Big 12) only touchdown came on a fumble return. TCU star Max Duggan had a quiet night himself, but Sonny Dykes’ offense is always only one play away. In this case, that play was Kendre Miller’s 75-yard touchdown run to go up 10-0.

7. TCU’s gauntlet is not over yet. Next week it goes to 6-4 Baylor. But the Frogs, 23-24 in Gary Patterson’s last four seasons, have clinched a berth in the Big 12 championship game in Dykes’ first season, and a first CFP trip is now three wins away.

8. Kansas State (7-3, 5-2) is zeroing in on the spot in Arlington opposite TCU. Chris Klieman’s Wildcats surprisingly trounced Baylor on the road, 31-3. QB Adrian Martinez got hurt again, but backup Will Howard, who previously scorched Oklahoma State in a 48-0 win two weeks ago, threw three touchdowns. While TCU made the first Big 12 title game upon its restoration in 2017, K-State has not played in one since 2003, when Ell Roberson and Darren Sproles famously led Bill Snyder to his lone outright Big 12 championship with a 35-7 rout of No. 1 Oklahoma.

9. It sure looked like Alabama (8-2, 5-2 SEC) was about to lose its third game of the season when Ole Miss, down 30-24, drove to the Tide’s 14-yard line with less than 2 minutes left. Stud freshman RB Quinshon Judkins had been running through the Alabama defense all afternoon. But then Lane Kiffin inexplicably began calling passes, with Tide DT Byron Young bottling up QB Jaxson Dart on consecutive plays, and Nick Saban’s team escaped with his New Year’s Six hopes intact.

Alabama has now played five games decided by six points or less. Saban has had two regular seasons (2016 and 2018) where there wasn’t even one.

10. I’ve rarely seen a freshman defensive player have as much of a profound impact as LSU LB Harold Perkins Jr. over the past several games. With the Tigers’ offense struggling Saturday against Arkansas (5-5, 2-4), Perkins near single-handedly kept the Razorbacks at bay with his four sacks, two forced fumbles (including one to seal the game), a pass breakup and many more pressures. Even Alabama’s Will Anderson Jr. wasn’t this far along as a true freshman.

No. 7 LSU (8-2, 6-1) was picked to finish fifth in the West at SEC Media Days in July. When Ole Miss lost to Alabama a few hours later, Brian Kelly’s team clinched the division.

11. No. 10 Clemson (9-1, 7-0 ACC) rebounded nicely from last week’s Notre Dame debacle, beating Louisville (6-4, 3-4) 31-16 to win its division outright. The Tigers still committed three turnovers, including a fumble by QB DJ Uiagalelei. Will Shipley’s remarkable 25-yard hurdle-and-go touchdown was a nice reminder that Dabo Swinney still has some elite playmakers if he can ever put it all together.

12. No. 15 North Carolina is right where it hoped to be when it brought back Mack Brown as head coach four years ago. The Tar Heels (9-1, 6-0) are heading to their first ACC title game in seven years after edging Wake Forest (6-4, 2-4), 36-34, on a late field goal. It was another huge night for QB Drake Maye, who threw for 448 yards and three TDs and ran 19 times for 71 yards and another score. The defense has not been their strength, but they stopped Wake on three fourth-quarter drives of a close game.

13. When UNC and Clemson meet Dec. 3 in Charlotte, Notre Dame fans will be sure to remind us the Irish beat both teams.

14. Embattled West Virginia coach Neal Brown needed a big win and the Mountaineers (4-6, 2-5) delivered Saturday, beating Oklahoma for the first time since joining the Big 12, 23-20 on a walk-off field goal. Brown, 13-20 in the Big 12 through four seasons, still needs two more wins to reach a bowl, and the fan base has largely lost confidence in him. But his fate may be tied to that of athletic director Shane Lyons, who somehow gave Brown a contract that would require a $20 million buyout to fire him next month.

Meanwhile, it’s been a sobering debut season for Oklahoma’s Brent Venables, whose 5-5 team is now assured its first losing Big 12 record since 1998. And the Sooners’ last two games, Oklahoma State and at Texas Tech, are not gimmes. 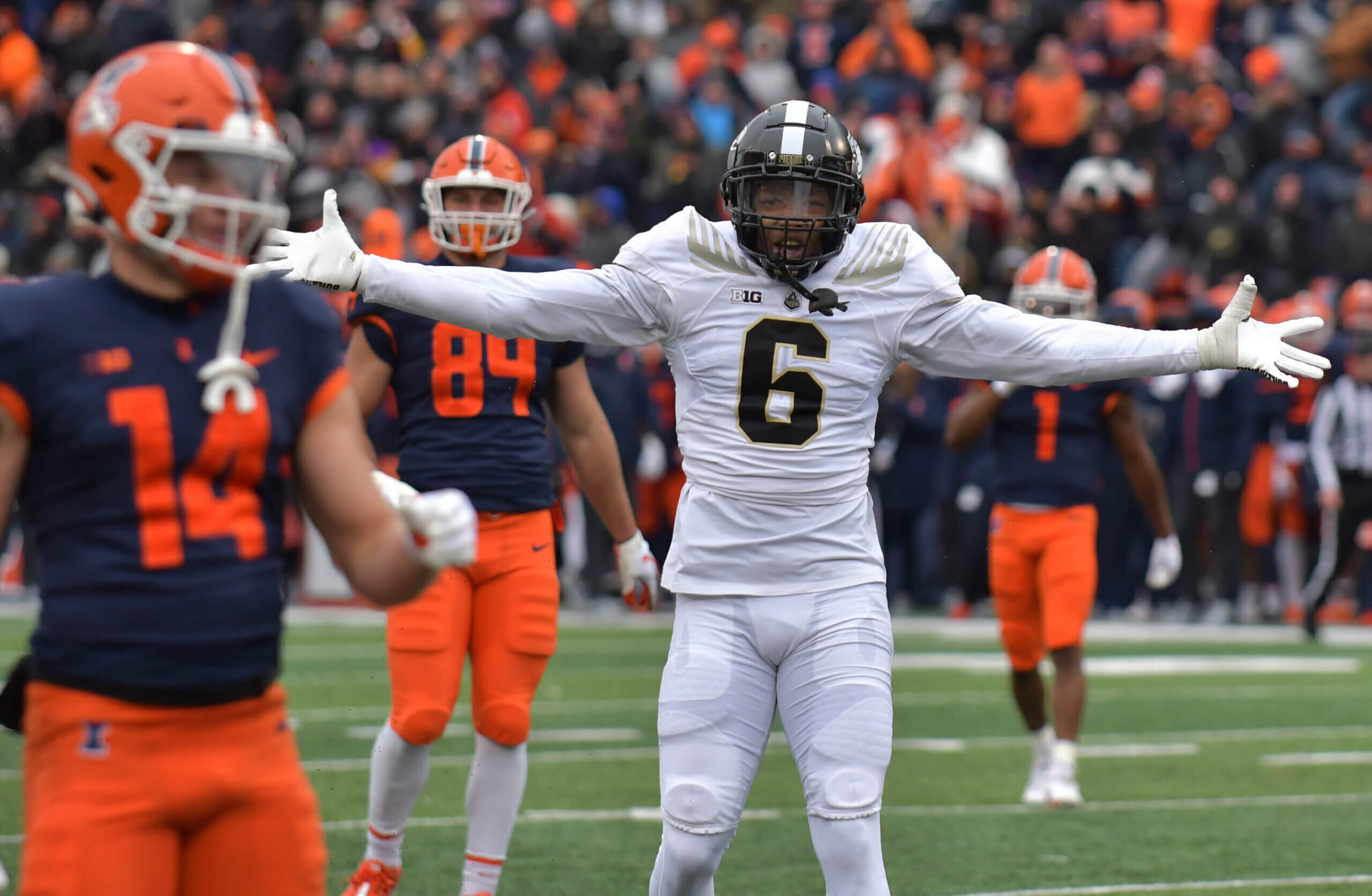 Illinois had a grip on the Big Ten West until two straight losses threw it right back into the mix. (Ron Johnson/USA Today)

15. This year’s Big Ten West makes a compelling case for ending divisions. With Purdue handing Illinois its second consecutive defeat, everyone has at least three conference losses, and two of the four teams tied for first are 6-4. One of those is Iowa (6-4, 4-3), who managed to beat Wisconsin 24-10 on Saturday despite gaining just 146 yards of offense. The Hawkeyes have a tough one next week at fellow contender Minnesota (7-3, 4-3), but the possibility of Ohio State and Iowa staging a rematch of the Buckeyes’ 54-10 rout on Oct. 22 is very much in play . Which is gross.

17. It has been a horrific first season for Virginia Tech coach Brent Pry. The Hokies are now 2-8 after falling 24-7 at Duke and have lost seven in a row for the first time since 1951. The program had slipped under Justin Fuente, but even his worst teams finished one game under .500. No one should write off a coach one year into a rebuilding job, and in fact, perhaps Pry can take heart in knowing the last time Virginia Tech won two games was in Frank Beamer’s first season in 1987.

Or for more current inspiration …

19. Also, let’s go ahead and start engraving some of those Coach of the Year awards for UConn’s Jim Mora. From the ashes of Randy Edsall’s 6-32 second tenure, Mora has the Huskies (6-5) going bowling after a 36-33 upset of 8-1 Liberty — the same Liberty team that won at Arkansas the week before. One of Mora’s first recruits last January was Ft. Lauderdale QB Zion Turner. His 30-yard TD pass to Kevens Clercius and ensuing two-point conversion with 5:43 left proved the difference.

Jimbo Fisher will be just fine, though. As long as his $86 million wasn’t invested in FTX.